The Oba of Benin, Ewuare II, has asked politicians to rein in their “thugs” and refrain from pre-election violence in the run-up to the September 19 governorship election in Edo State.

He urged politicians to give peace a chance, saying occupying a public office should not be a do-or-die affair.

The first-class monarch spoke in his palace yesterday at a parley with the governorship candidates of the 14 parties in the election and other top politicians in the state.

He said he had been having sleepless nights for some days over violence and thuggery in the state.

The two main contenders – Governor Godwin Obaseki, who is seeking re-election on the platform of the Peoples Democratic Party (PDP) and the standard-bearer of the All Progressives Congress (APC), Pastor Osagie Ize-Iyamu – embraced at the Benin palace.

The Southsouth Zonal Chairman of the PDP, Chief Dan Orbih; Edo Chairman of APC, Col. David Imuse (rtd.) and his PDP counterpart, Dr. Tony Aziegbemi; among other top politicians, were also at the meeting.

The Oba of Benin said: “Today (yesterday) is a historic and significant day in the history of Benin Kingdom. From the ancient throne of Benin Kingdom, we appreciate your respect and we also respect you. Those who are falling short should respect the tradition of the Benin Kingdom.

“I have noted that Benin’s (Edo State’s) politics has been in the news for quite some time for all the wrong reasons. I have been having sleepless nights for some days. We are all from Edo State. We are not strangers.

“I became so worried when the conflict between Oshiomhole and Obaseki started. I have a personal relationship with almost everybody here (at the palace). I am not sure I will call (Phillip) Shaibu my son again, because of the way he (Shaibu) is going. Shaibu refused to honour his assurances to me. You do not say something to me and you go against it.

“Why do you want lives to be lost by arming thugs, who will later hide the guns? Enough is enough. Let the September 19 governorship election in Edo State be peaceful. Be mature and be proud of Edo State. Do not make Edo State a laughing stock.

“Shaibu, behave yourself. Calm down. I learnt you control thugs. Tell your boys to a ceasefire and drop their arms. Let your boys calm down. Must it be a do-or-die affair? Do not turn Benin into a city of thugs. Do not kill yourselves, because of public office. Stop the shootings. I am very sad about what is happening in Edo State. This is the worst scenario. Let us eschew violence and give peace a chance.”

The eminent monarch said there must be a violence-free environment, ahead of the crucial election, to shame people, who would want to laugh at Edo people.

He said there must be a positive change after the peace meeting, adding that emphasis must be placed on peace and tranquility.

Recalling the genesis of the face-off between Oshiomhole and Obaseki, the Oba of Benin said: “I had some memorable times with Oshiomhole as governor. People were asking me who would take over from Oshiomhole in 2016. I asked Oshiomhole to propose not to impose whom he had in mind as his successor, but he said he was still thinking about it, promising to let me know at the appropriate time. 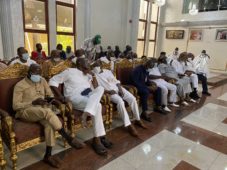 “Two or three weeks later, Oshiomhole came back to me and said he had thought about it and gave his position with analysis. I will not bother you with the details. He mentioned three aspirants, but he zeroed in on Obaseki. Oshiomhole gave the strongest reasons in the world, why it must be Obaseki and nobody else; particularly that he was then the chairman of his economic team. I was not against Oshiomhole’s choice and the imposition of Obaseki, but I said no word.

“Halfway into my seeing off Oshiomhole that day, he stopped and asked why I said nothing about his choice of Obaseki. I told him I would give my opinion in future. Some royal members of Obaseki’s family and many other persons were against Obaseki’s choice by Oshiomhole. I am keeping some sensitive parts out.

“Again, after three weeks, Oshiomhole came to me, but I said I still had no opinion. I told him that his decision on Obaseki was not a proposal, but an imposition. That was why I had no opinion. Oshiomhole said Obaseki would do much better than him and continue his legacy projects.

“Oshiomhole invited Alhaji Aliko Dangote to speak with me on his choice of Obaseki. Dangote came to Uselu (in Benin) and he spoke with me on Obaseki for over one hour, but I kept quiet. Oshiomhole and Obaseki also visited me in Uselu, but I still kept quiet.

“Since Oshiomhole brought only one governorship aspirant (Obaseki), I had no choice. I knew Obaseki when I was in Atlanta, USA.

“Dangote stood as a guarantor for Obaseki to be of good behaviour and that if Obaseki misbehaved, I should contact him (Dangote). I still kept quiet.

“Oshiomhole and Obaseki were initially very close. What I thought was going to be a smooth ride, turned to unprecedented conflict. I tried to intervene several times and I went to President Muhammadu Buhari over the matter. 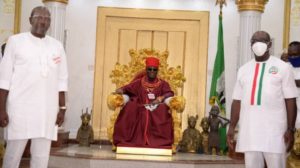 “At a point, both of them started avoiding me, but I kept praying for Oshiomhole and Obaseki for God to resolve the problem between them, but it kept deteriorating. Family members can quarrel, but there must be resolution today (yesterday). You are all Benin palace family members.

“I cannot have you fighting. I want to plead with the politicians to sheathe their swords because the international community is watching. We have done traditional prayers to avert violence before, during and after the September 19 governorship election. I am pleading with Edo politicians to control youths and their thugs.

“I do not expect John Odigie-Oyegun to be on either side, but to call both sides to a ceasefire. Enough is enough. Let the election be peaceful. Dan Orbih, please do your best to reduce the temperature in Edo State. Let there be peace and tranquility because everybody is afraid. Show respect to the traditional institution, without lip service, just to get votes.

“Odigie-Oyegun, my in-law, I will hold you responsible, if you do not use your elder-statesmanship status to stop the violence in Edo State.”

Obaseki said he swore an oath to protect the lives and property of Edo residents, which he noted he would always do, as the Chief Security Officer (CSO) of the state.

He said he would try his best to ensure peace.

Shaibu said: “I will do as you (Oba of Benin) have directed, by telling my boys to calm down.”

Ize-Iyamu hailed the monarch for the timely initiative and intervention. 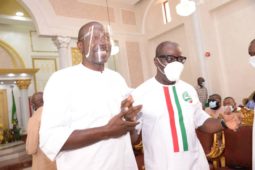 He said he and other APC leaders would speak with their supporters to always give peace a chance, as they had been doing.

Speaking at 12:28 pm, he walked up to Obaseki, whom he described as his elder brother and embraced him.

Orbih said it would be in the interest of the people of Edo State to ensure peace before, during and after the September 19 governorship election.

Oshiomhole said he had been preaching free and fair governorship election, with emphasis to be placed on one man, one vote, without violence.

He described himself as a product of peaceful election, winning in the 18 local governments.

Oshiomhole hailed the Oba of Benin for the peace efforts. Odigie-Oyegun assured the monarch of a peaceful election. The one-time governor said he would continue to speak with all political actors in the state.