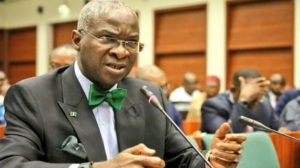 THE Federal Government on Thursday told the Senate that it was owing 3,504 Contractors across the country.

Speaking when he appeared before the Joint National Committee on Housing to defence the 2021 Budget proposals of his Ministry, Minister of Works and Housing, Babatunde Fashola said that these owed contractors by the Federal Government are handling various housing projects to the tune of N69.9billion.

According to him, the N76.4bn allocated to the ministry in 2021 would be grossly inadequate to execute 186 projects across the country.